Even before P&O Cruises Australia’s announcement on Monday this week that Pacific Dawn was leaving the fleet, there has been considerable speculation for some time about the future of both Pacific Dawn and Pacific Aria, both of which had been sold to join the CMV fleet before COVID-19, but were not joining CMV for some time. The sister ship to Pacific Eden and Aria, Pacific Dawn turned 25 last year. She has carried the most passengers in P&O's current fleet (joining in 2007) and began home-porting in Brisbane in.

In January 2020, Jalesh Cruises announced planned acquisition of a second ship to double fleet's capacity. The second-hand vessel (name was not announced) was scheduled to start operations in October 2020. In mid-October 2020, Jalesh announced in a statement that the company suspends operations permanently due to the ongoing Coronavirus-related port closures and international travel restrictions.

The vessel was launched on May 25, 1989, as 'Crown Princess', and delivered to P&O Princess Cruises on June 29, 1990. The inaugural voyage started on July 8. In 2002, the shipowner P&O Princess Cruises created A'Rosa Cruises (Germany-targeting brand) and transferred the vessel, renaming it 'A'Rosa Blu'. In 2004, the new shipowner Carnival Corporation transferred the vessel to the AIDA subsidiary, increasing its capacity (to 2014 passengers, 621 crew) and renaming it to 'AIDAblu'. On April 24, 2007, started Ocean Village Two's Inaugural cruise (Mediterranean itinerary) following a drydock refit at Lloyd Werft (Bremerhaven Germany). The vessel joined its fleet mate Ocean Village One (currently Columbus).

Pacific Jewel cruise ship as the design was sister to Pacific Dawn (MS Satoshi since 2020) and similar to Pacific Pearl (CMV Columbus since 2017) and Crown Princess.

In 2010, the Ocean Village company ceased operations. In November the vessel was refurbished in Singapore (at Sembawang Shipyards), renamed 'Pacific Jewel' and started a South Pacific cruise itinerary program with departures from homeport Sydney NSW Australia.

Vessel's official delivery to Zen Cruises was on March 12 (2019), followed by a major drydock refurbishment. Renamed 'Karnika', the liner started operations for Zen Cruises (via the brand 'Jalesh Cruises') on April 17, 2019, from homeport Mumbai.

The cruise ship is named after the celestial maiden/nymph Apsara Karnika (female spirit) who rewards with treasures and pleasures those engaged in hard labour. 'Manikarnika: The Queen of Jhansi' is a 2019-released Indian epic drama movie based on the life of Lakshmibai (Rani of Jhansi / 1828-1858, born in Varanasi). She was the Queen of Jhansi (reign 1853-54 and 1857-58). The Jhansi region is currently part of North India's Uttar Pradesh state.

The cruise liner has 5 dining venues. P&O AU recruited its first-ever celebrity chef manager (Luke Mangan) to add his touches to the food menu in the Salt Grill (steakhouse and seafood restaurant). The ship also has a dedicated chocolate cafe serving chocolate ravioli, warm chocolate fondant, Belgium waffles, gourmet cookies. The buffet restaurant, a la carte Main Dining Room and The Grill add more fine dining options. For a fee is the Asian La Luna Restaurant with an 8-course banquet. VIP dining is offered by the 14-seat 'Chef's Table' package (in the Galley/kitchen).

The cruise ship features an exquisite Aqua Health (Spa and Fitness/wellness complex) that spans on 2 decks and is sized 1300 m2. It consists of 11 oceanview treatment rooms (for massages), Beauty Salon, Gym, Thermal Suite.

Evening entertainment is standard cruise ship fare with a mix of guest entertainers and Broadway-style production shows. For kids, innovative activity clubs include Turtle Cove (ages 3-6-yo), Shark Shack (ages 7-10-yo) and HQ for teens. Adults can relax in the child-free Oasis on ship's top deck, while all ages enjoy the swimming pool on Lido deck and the adventures of P&OEdge program, held all over Jewel, with a climbing course on the funnel and a zip line across the top deck.

Follows the complete list of Pacific Jewel lounges, clubs and other entertainment venues for kids, teens and adults.

MS Pacific Jewel started its carrier under the name 'Crown Princess' - operated by Princess Cruises from 1990 to 2002. Then for 2 years, it was operated as 'Arosa Blu' by Arosa Cruises, then for 3 years as AIDAblu (AIDA Cruises) and for 2 years as 'Ocean Village 2' (by Carnival's brand 'Ocean Village Holidays'). In 2009, the ship was transferred to P&O Australia's fleet, renamed 'Pacific Jewel' and homeported in Sydney NSW (leaving from 'White Bay Cruise Terminal WHT5').

Pacific Jewel's Cruise to Nowhere deals was on specially themed Australian roundtrips with no additional ports of call along the route. These short-breaks were usually themed 'Food and Wine', 'Music' (various styles/performers), 'Comedy', 'Sports'. P&O Australia 'cruises to nowhere' prices were inclusive of all special activities and themed onboard entertainment, including classes and workshops, lectures, presentations, guest performances, theme parties.

In 2017, the liner replaced in New Zealand the fleet-leaving Pacific Pearl (now CMV Columbus), offering roundtrip Pacific Islands itineraries out of homeport Auckland NZ. Jewel was the first-ever cruise liner to visit the privately-owned Conflict Islands (Papua New Guinea) - in June 2016. This is a group of all 21 islands surrounding a blue lagoon with a pristine reef system. This made the new destination one of the perfect ones for snorkelling and diving excursions in the South Pacific. The Conflict Islands were part of P&O Australia's Papua New Guinea itineraries. The ship operated out of Melbourne (Victoria) (between November 2017 and March 2018) for 109 days, offering 18 voyages. A new 12-night NZ itinerary visited Fiordland Park and Stewart Island. Short Breaks were offered to Eden NSW and Kangaroo Island. In 2017, following Pacific Pearl's farewell, Pacific Jewel became PandO's New Zealand ship homeported in Auckland NZ for 2 months (Sept-Dec) and cruising to South Pacific Islands, before returning again in 2018.

Pacific Jewel's last cruise for P&O was the 11-day repositioning Australia-Asia itinerary from Fremantle to Singapore.

On January 28, 2018, the US satellite TV channel Cartoon Network announced its plans to start its own cruise line brand - 'Cartoon Network Wave'. The new brand is a partnership between the parent company Turner Broadcasting (Time Warner) and Oceanic Group (Asia-Pacific based cruise and leisure industry). The Cartoon Network Wave cruise line will operate voyages to 13 Asia Pacific destinations, including China, Singapore, Malaysia.

The colourful vessel will start its maiden voyage from Singapore in late 2018. On board will be provided one of the best kids-themed experiences at sea. It will feature 800 staterooms, 11 entertainment decks (hosting themed nights - including theme parties and circus shows), rope course (outdoor adventure park), 'Young Tooniverse' (outdoor playground for kids), Toonix pool, cartoon-themed onboard activities and amenities (entertainment, food, drinks, characters meets&greets - The Powerpuff Girls, Adventure Time, Ben 10, We Bare Bears).

The released artist’s impression images (based on the Pacific Jewel ship) resulted in speculations that the liner had been sold to the new company.

However, PandO responded that the vessel stays in the fleet, with scheduled drydock refit and homeporting in Auckland NZ and Brisbane QLD.

There are no user reviews for this ship. Be first, share your experience!

Carnival Corporation’s P&O Cruises Australia announced the accelerated retirement for one of its cruise ships as part of Carnival’s previously announced plan to remove older, less efficient cruise ships from its fleet. The cruise ship, the Pacific Dawn, is rumored to have been sold for further service.

According to P&O Australia’s press release, “It had previously been announced the 1,546-guest Pacific Dawn was due to leave the P&O Cruises fleet in February next year as part of the transformation of the fleet over time. However, she will now leave in the coming weeks to facilitate her sale.”

Originally, the sale of the Pacific Dawn had been announced earlier in 2020 to become part of the UK-based cruise line Cruise and Maritime Voyages. She was part of a two-ship deal along with the Pacific Aria (built in 1994 as the Ryndam) with P&O scheduled to deliver both ships early in 2021. Carnival had included these ships in its earlier announcements about the number of ships it said would be departing the fleet, but CMV later went into administration in the UK. The cruise ships CMV marketed, although owned by a separate company, were recently scheduled for auction to pay outstanding debts.

The former chief executive of CMV has been working to re-establish the cruise company. He recently agreed to buy some of the assets of the travel agency business, including the database and reservation systems, from the administrator.

Built at Fincantieri and introduced in 1991, the 70,000 gross ton cruise ship had been among the largest cruise ships in the world. She operated for more than 15 years for Princess Cruises as the Regal Princess before being transferred to Australia in 2007. At the time, she was the first large, modern cruise ship to be operated in the Australian market. 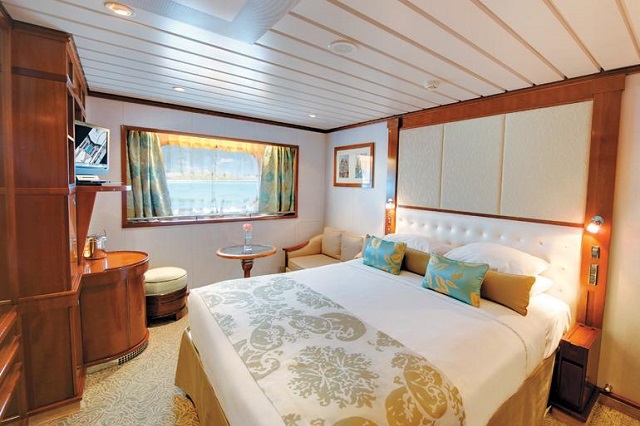 Sture Myrmell, president of P&O Cruises Australia, apologized to passengers expecting to sail with the ship during its farewell season. Having been P&O’s head of hotel operations when Pacific Dawn first joined the fleet, he said that he was disappointed that they would not be able to have a farewell sailing for the ship. He, however, noted her significant role in the Australian cruise market.

Since sailing on her first cruise from Australia in November 2007, Myrmell said she had carried 1.2 million passengers on a total of 601 cruises and traveled a total of 1.2 million nautical miles. She was homeported in Sydney, Melbourne, Brisbane, and Auckland over the past 13 years. The Karnika, operated by Jalesh Cruises in India is a sister ship to the Pacific Dawn. The ships had operated together in Australia until the then Pacific Jewel was sold and delivered to her new owners in 2019.

The Pacific Dawn, along with the Pacific Aria, was repositioned from Australia to an initial lay up in Manila. In August, the two ships sailed across the Indian Ocean and through the Suez Canal repositioning to lay-up off Cyprus. That had led to speculation of an imminent sale or possibly the scrapping of the two ships.

P&O Australia currently has canceled all cruises to December 2020 and when it resumes service plans to add two larger cruise ships that were previously operated by Princess Cruises. There has been no announcement about the fate of the Pacific Aria.