Last week, Uruguayan President Luis Lacalle Pou and his administration began to move forward in the bidding process for a five-star resort-casino. According to a representative from Uruguay’s Ministry of Tourism, the new resort-casino — which has not yet been developed — will open to proposals from international bidders beginning on September 23. It will then remain open for an additional 60 days.

The new proposed resort-casino is the second in just under a year that Uruguay’s government has opened to international bids. ©wilmer2000/Pixabay

A new casino resort will be added to the skyline in Uruguay in the not-too-distant future. Cipriani, a mega company that operates luxury hotels and clubs around the globe, is pulling out the.

Not The First Time For Uruguay

The announcement from Uruguay’s government that a new resort-casino is in the works comes just shy of a year after the country’s Ministry of Tourism and Ministry of the Economy announced that they were opening bids to privately own and operate a new casino in collaboration with one confirmed owner, Grupo Cipriani.

At the time, bids were open until January 20, 2020 for international companies interested in collaborating with Grupo Cipriani to revitalize the decaying building on the premises, formerly known as the San Rafael Hotel in Punta del Este, Uruguay. The new location is to be called the Cipriani Ocean Resort & Club Residencies Punta del Este.

In mid-September, 2020, Uruguayan President Luis Lacalle Pou took part in a meeting at the Rocha Athletic Club, attended by a number of government higher-ups, including Rocha’s Mayor, Flavia Coelho, and Uruguay’s Minister of Tourism, Germán Cardoso. Discussed in the meeting were the location specifics, as well as the bidding process.

According to the officials who presented at last week’s meeting, Uruguay’s new resort-casino will be located between Chuy and La Paloma, which are on the eastern coastline of the country. This new location will take advantage of the scenic location, and will reportedly be constructed on the coastline — surely attractive to many tourists.

In the presentation, Uruguay Minister of Tourism Germán Cordoso explained that the country’s authorities had been working on this project for some time. As they worked to find the ideal spot for this new money-making venture and landed on this region, time and money was invested in beautifying the area to make it as appealing as possible.

Officials speaking for the joint forces working to open this new resort-casino also made clear that international bidders would have the chance to make more specific, tailored requests based on what they would like to create on the land. Applicants could suggest projects over a set amount of the construction space, or allocate other land accordingly.

How The Bidding Process Will Work

Beginning on September 23, international companies have sixty days to submit their bids to invest in Uruguay’s new and as-yet unnamed oceanfront resort-casino property. According to reports, the Uruguayan government is seeking to attract as many bidders as possible, indicating how seriously they are taking this venture.

Applicants interested in placing bids on the new resort-casino property can find the necessary paperwork through the website of President Luis Lacalle Pou’s office, as well as the website of Uruguay’s Ministry of Tourism. Federal and local officials will be called on to review applications, including the local mayor and the Secretary of State.

While not many more specifics about the bidding process were given in this announcement, it’s quite likely that it will follow in the footsteps of last year’s bidding process for the Cipriani Ocean Resort & Club Residencies Punta Del Este. At that time, international bidders would be considered if they made bids starting at $160 million (USD).

In addition to this $160 million minimum, bidders would need to comply with costly mandatory taxation for the first several years of business. Owners would be expected to pay $7.8 million annually, with an additional $100,000 added each year for the first few years of ownership — that’s a significant amount!

In the last several weeks, Uruguay’s typically-sleepy gambling industry has stepped up the pace. Last year, it seemed certain that gambling industry giant Codere would be selling off a sizeable number of its Uruguay locations, but this year, Codere has held fast, most recently partnering with Aristocrat to install new cabinets in several Montevideo casinos.

During Pandemic, Uruguay Could Be LatAm’s Winner

For months now, Uruguay has managed to avoid both the health and financial tolls the novel coronavirus has taken on countries around the world, including in Latin America, where nearby countries like Brazil, Colombia, Argentina, Venezuela, and Mexico have been devastated in either category.

Many credit Uruguay’s ability to keep down coronavirus cases with its internally-developed COVID tests. A growing number of people in Argentina are looking to move to Uruguay, which could mean a boost to the nation’s economy, even as tourism has faltered during the pandemic: officials anticipate it will not reopen to tourists for at least another few weeks.

Because the country has managed to offset its COVID-19 related losses less than nearby countries Argentina and Brazil, Uruguay is currently considered to be leading the region, in some senses. While the economy will take a hit during this time, it will be shrinking by less than its neighbors, with the national GDP expected to fall 3.5%.

Uruguay, South America land casinos listed by area: (In the Uruguayan casino listings, gaming times, type of games, minimum bets, promotions, services, facilities etc., if shown, are indicative and may change.)
See useful information on Uruguay below on this page, at the end of the land casinos listing. 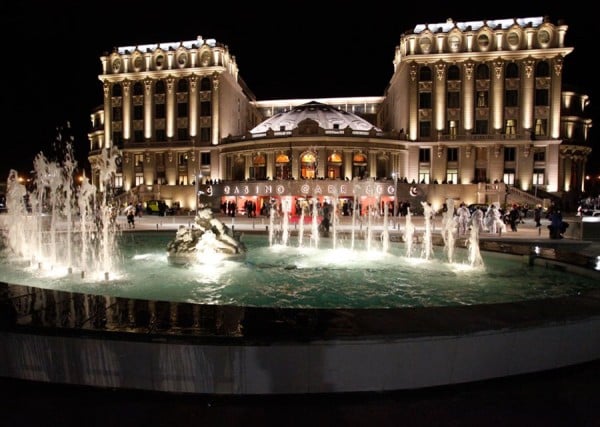 Atlantida - There is 1 listed land-based gambling casino in Atlantida.

Montevideo - There is 1 listed land-based gambling casino in Montevideo.

Victoria Plaza Casino,
Radisson Montevideo Victoria Plaza Hotel, Plaza Independencia 759, Montevideo 11100, Uruguay. Telephone: +598-2-9020111, Fax: +598-2-9021628, Email: [email protected], Website: www.radisson.com/montevideo-hotel-ur-11100/urumont
Nearest Airport: Carrasco International Airport (MVD), 30 minutes drive
Minimum Gaming Age: 18
Entrance Fee: Free
ID/Passport: Not required
Dress Code: Smart/Casual
Opening Times: Daily from 8 am to 5 am, Table games from 2 pm
Gaming Currency: Uruguayan peso (UYU or U$), US dollars
Games to play: 500 Jackpot Slots/Video Machines, 1x8 Touchbet Roulette (double zero, minimum bet U$5), 10 Video Roulette Machines (double zero, minimum bet U$5); Live table games (12): 10 Roulette (minimum bet from U$20 and US$2), 4 Blackjack (minimum bet from U$200 and US$20), 2 Baccarat; Cardroom: 5 Texas Hold'em Poker, Tournaments
Facilities: Restaurant, 3 Bars, Promotions, Entertainment, Hotel facilities
Remarks: Radisson Montevideo Victoria Plaza Hotel is situated in the centre of the financial and commercial district, in Plaza Independencia, the main city square in Montevideo. Hotel amenities include an on-site completely renovated casino and spa.
Review - Editor's personal experience at the Victoria Plaza Casino in Montevideo:
This is a large state owned casino, within the Radisson twin-tower Hotel by the same name. It is a three-part casino spread between the towers of the hotel building. The main live table games area is in the rear tower on the same floor level as the hotel reception hall. It comprises 2 gaming currency sections for the table games - one US$ and one U$, 32 slots/video machines, the cardroom area for poker players, a restaurant and a bar. The US$ gaming section has 4 roulette tables and two blackjack tables, and these are the only games played in US dollars. Everything else is in Uruguayan currency. Buying-in chips is done through the cash desk. You cannot hand in money at the tables. The restaurant has a limited menu in Spanish and the service is good. In the basement below the table games area there is a slots hall with about 150 machines. Opposite the slots hall, on the same level, in the front tower of the hotel, there is another slots hall with about 300 machines. All gaming areas are accessible from inside the hotel and from the street, under the corridor that joins the two towers (see photos). The live roulette tables are the single zero American style. The roulette table used in this state run casino is much longer than the standard American style table. There is an extra space between the wheel and the layout, where the coloured chip stacks are placed (not around the wheel), stacked in 10s instead of 20s. The sizes of the coloured roulette chips in this particular casino are much smaller than the standard size chips found in most casinos. They look like the chips as used in French roulette. The cash chips are colour coded only. They do not show the amount. The dealer will not place bets on behalf of players. The dealer uses a stick to collect the chips from the far end of the table and chips are stacked by hand. The outside bets markings are detached from the main numbers layout. They are at the edge of the tablecloth and therefore players cannot place their chips on the tablecloth, only on the hard surface on the perimeter of the table where drinks are placed.
Rating:Very good casino!
[April 2011 last update. Reviewed April 2011]
Go to top of this page . See 'Casino Reviews' Index page

Piriapolis - There is 1 listed land-based gambling casino in Piriapolis.

Use the 'Main Menu' on the top right margin to explore this site. This is a comprehensive gambling information site with advice on winning, how to gamble, Betting systems, gambling articles, world land-based casinos directory, casino reviews (reviewed and rated), the best Online casinos, free online games, and lots of gamblers information and resources.

This is the gambling website with lots of information and resources as well as helpful advice and frequent updates thanks to your helpful feedback.