Initially, Phil and Chance agreed to start the match on September 16, but it was postponed for a week. Apparently, both grinders took this challenge seriously. Here is some spice to the story: Both Galfond and Kornuth are founders of poker schools — Run it Once (RIO) and Chip Leader Coaching (CLC), respectively. Galfond then stuck in a five-bet with but ran into the of ActionFreak to drop another stack. As that was happening, another four-bet pot on the other table saw hit the felt. Galfond check-called a quarter-pot bet for a turn. He checked again and ActionFreak bet €12,149, half the pot.

What Is the Galfond Challenge?

High-stakes poker professional Phil Galfond has issued a challenge to the poker world with the Galfond Challenge. The founder and owner of Run It Once poker will be taking on at least six opponents in a series of individual high stakes heads-up matches that are played out of the course of weeks, or sometimes even months.

The heads-up matches will be played in Pot-Limit Omaha over a predetermined amount of hands, with blinds at €100/€200 or even higher. Both players have wagered money on the side in addition to the money won/lost during the matches itself.

Who Are Phil Galfond's Competitors?

At the time of writing, six players have lined up to take on one of the PLO end bosses of the game. These six competitors are Bill Perkins, Dan 'Jungleman' Cates, Chance Kornuth, and Brandon Adams, as well as high-stakers 'Venividi1993' and Ioannis 'ActionFreak' Kontonatsios. Five of these six will contest Galfond on the digital felt, while Adams will only play Galfond in heads-up live poker.

Galfond has defeated both 'VeniVidi1993' and 'ActionFreak', while sporting a lead over Perkins and Kornuth in their ongoing matches. 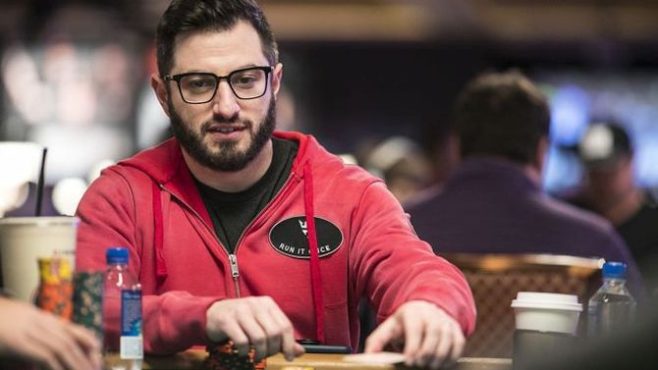 What Is At Stake in the Galfond Challenge?

The Galfond Challenge features high-stakes Pot-Limit Omaha cash game poker with swings that can go up into millions of dollars. In addition, the loser will pay the winner a side bet that's been negotiated upfront, often a six- or seven-figure amount. Galfond is laying odds with most of his opponents.

The Matches in the Galfond Challenge

An epic showdown between Phil Galfond and 'Venividi1993' came down to a final €100/€200 Pot-Limit Omaha session. Galfond, who had found himself on the ropes multiple times throughout the challenge and was even trailing over €900,000 at one point, completed the ultimate comeback on the final night. Galfond was up €12,500 with about 75 hands to go, allowing him to blind off to win the €100,000 side bet from his Dutch opponent.

In the aftermath of winning his 25,000-hand match against 'Venividi1993', Phil Galfond didn't waste any time with either celebrations or preparations for his ongoing Challenge series. Instead, two days after wrapping up his epic victory, Galfond sat right back down at the tables and traded the first blows with opponent No. 2, high-stakes tournament vet Bill Perkins.

After just 862 hands, Galfond has opened up a $90K lead. The action in this challenge has been dormant for a while as Galfond focused on his other matches, while Perkins launched his new book Die With Zero.

Galfond's second series of matches against Ioannis 'ActionFreak' Kontonatsios provided much less drama than the first one. Galfond took an early lead in the challenge and rode it all the way to victory. Entering their final session, Galfond held a €237K lead over his opponent.

While 'ActionFreak' was able to recoup some of his losses, he ultimately had to shed with €114K of his own money after the 15,000 hands had concluded. Galfond and Kontonatsios had an even money side bet of €150K riding on it for a total profit of €264K and two for two for the Run It Once founder.

After a quiet summer, the action flared up again in the Galfond Challenge with Galfond starting his series of heads-up battles against Chance Kornuth. The duo will play 35,000 hands against each other with the action kicking off on WSOP.com due to Kornuth living in the United States.

The Run It Once founder is laying a mighty price to his fellow coach: €1 million against Kornuth's €250,000. After 15% of their match completed, the favorite Galfond took a comfortable lead. However, a crushing streak of wins by Kornuth turned the match on its head and left him up a significant margin, almost $350K.

After a long stretch of close to break-even play, but Galfond finally put together a three-session run in which he profited more than $300,000 to reduce his deficit back to five figures. Kornuth stringed together three wins after that, but none were particularly large, so when Galfond booked back-to-back wins worth another $124K, he retook the lead on Dec. 4.

It proved a short-lived lead as Kornuth inched back in front the very next session with the players past the halfway mark. He'd grab one more small win, but then a big Galfond win pushed him back in front, and the back-and-forth battle remains closer than many predicted at this juncture.

Possibly the most-anticipated match of the Galfond Challenge, Galfond will take on Dan 'Jungleman' Cates in the near future. While details have to be fully fleshed out, such as the side bet, the duo has already played a mini-challenge with Galfond walloping his adversary for €86K.

The match between Phil Galfond and Brandon Adams will be different than the other five as this match will be fully played out in yet to be determined live setting. Instead of a # of hands, the two will play for a total of 40 hours before the winner is determined. Galfond is laying €150K against Adams' €100K.

What is the Galfond Challenge?

A series of high-stakes poker matches against Phil Galfond, a poker professional, and owner of the poker site Run It Once.

Who is Phil Galfond?

Phil Galfond is a highly respected professional poker player who's played the highest stakes on the planet. He's known under his aliases 'MrSweets28' and'OMGClayAiken' online and is especially feared for his Pot-Limit Omaha skills. Originally from Gaithersburg, MD, Galfond has won nearly $3 million dollars in live poker winnings according to The Hendon Mob, as well as countless more money in online cash games and tournaments. He also has three World Series of Poker bracelets.

Why is there a Galfond Challenge?

Once a dominant player at the high stakes, Phil Galfond has stepped away from playing poker professionally to start his own poker site Run It Once. However, wanting to get back into the high-stakes ring, Galfond issued a challenge to the poker world to play him in a series of heads-up pot-limit Omaha matches.

Who is challenging Phil Galfond?

'ActionFreak' is a Greek high-stakes player named Ioannis Kontonatsios, who is more famous under his moniker. 'Venividi1993' is a Dutch poker player that prefers to remain anonymous.

What is at stake in the Galfond Challenge?

The Galfond Challenge features high-stakes Pot-Limit Omaha cash game poker with swings that can go up into millions of dollars. In addition, the loser will pay the winner a side bet that's been negotiated upfront, often a six- or seven-figure amount. Galfond is laying odds with most of his opponents.

How can I watch the Galfond Challenge?

The Galfond Challenge can be followed on the Run It Once Twitch channel, where all matches will be live-streamed. PokerNews often provides recaps of all the action.

Can I bet on the Galfond Challenge?

Yes, players are able to bet on the outcome of the various Galfond Challenge matches.

Has Phil Galfond won the Galfond Challenge yet?

Phil Galfond has won two of his Galfond Challenges so far, against 'Venividi1993' and 'ActionFreak'. Other matches are in progress or upcoming.

Start Your Run It Once Poker Career With a €600 Bonus

Run It Once is giving all PokerNews reader a welcome bonus worth up to €600. Download Run It Once Poker via our links, create your account and watch as all your deposits for the first 30-days after making your first deposit are matched 100% up to a combined maximum of €600.

The bonus releases into your account at the rates shown in the table below. Perhaps the best feature of this bonus is it never expires so long as you play at least one raked hand every 30-days. Do this and you can take as long as you wish to clear your bonuses.